D-Day… A Lesson In Clarity vs. Certainty 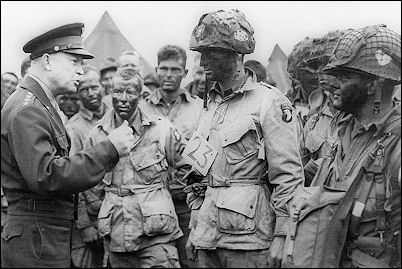 Today marks a special day not only in American history, but also in world history. Seventy-two years ago, on June 6, 1944, the Allied Invasion of Normandy… also known as D-Day… took place. And, while we should all pause to honor those whose sacrifice was the ultimate, whose service was selfless, and whose lessons in heroism are second to none, I’ve spent today thinking about another part of D-Day as well… another lesson from what many call the most difficult and complicated operation ever. That lesson is the lesson of clarity vs. certainty.

Imagine: 6,000 Landing craft, ships and other vessels carrying 176,000 troops. 822 Aircraft filled with thousands of parachutists; An additional 13,000 aircraft to provide air cover and support for the invasion; all operating in unison in one of the most chaotic environments imaginable. Life and death decisions being made every second; the decision of one affecting the lives of millions; No time to ask for permission; No time to wait to be told what to do; History, literally, hanging in the balance. How did they do it? How did they succeed?

And yet, despite that clarity, there was also a complete absence of certainty. Victory was anything but certain that day. In fact, many predicted failure. Behind closed doors, Eisenhower himself questioned the outcome. But, as he and his staff knew…and as leaders today can learn… clarity need not equate to certainty. For it is clarity that allows aligned decisions to be made in uncertain, chaotic environments.

The leaders of D-Day didn’t possess the crutches of certainty that many of today’s leaders confuse with clarity either. You see, seventy-two years ago there was no PowerPoint available to create a slide deck in preparation for the invasion. There was no email to “reply all” to clarify the order. And, there were no cameras available to watch and lead the operation in real-time from headquarters. On June 6, 1944, success of the world’s most complex operation relied not on the crutch of certainty, but on the conviction of clarity.

So, in honor of D-Day, my question to you as the leader of an organization, or a team within an organization, is this; If tomorrow, you got to work and email was down; If PowerPoint was unavailable; If you couldn’t be in any of the meetings where decisions need to be made; If you couldn’t be in the trenches alongside your troops; do your people have the clarity to succeed anyway?

Even better, my challenge to you is this…try it! That’s right! No email, no PowerPoint, no conference calls. Just leadership through clarity… through intent… for one day. Would you succeed? Would your people succeed? Would you be able to say to your people…. with clarity… as Eisenhower said to his, “I have full confidence in your courage, devotion to duty, and skill”?

If not, you have some work to do. Your people deserve nothing less.